As part of our 7-week collaboration with XtalPi in the 2nd Edition of Fundamental of Solid Formulation (FSF2021) webinar series, CfPC is pleased to announce the 6th webinar in the series, “Application of 15N SSNMR to Differentiate and Quantify Different API Amorphous Phases in Complex Tablet Formulation” with Ales Medek, PhD (May 12 from 11:00 AM – Noon EDT).

There is no registration fee to participate in this virtual event as we would like to remove any barrier for broadening the learning opportunities and engagement with scientists and researchers at this time.

A crystalline salt of a development stage active pharmaceutical ingredient (API) was chosen as the leading solid form, in part, to mitigate the known chemical degradation lability of the free form. To assess the risk of the salt dissociation during manufacturing or upon storage, solid state method had to be developed capable of detecting small amounts of free form in drug product in the presence of the full tablet matrix. The mechanism of the salt dissociation involved first its amorphization (to amorphous salt), followed by its dissociation in the presence of acidic tablet components into amorphous free form. As such, the solid state method had to be also able to distinguish between amorphous salt and amorphous free form. Since 19F SSNMR provided little resolution between the two amorphous forms we turned to 15N SSNMR based on nitrogen exquisite sensitivity to detect changes in a protonation state. Indeed, we found 15N SSNMR was capable of resolving both amorphous forms. API 15N isotopic enrichment was further employed to also deliver the desired method sensitivity when diluted by tablet matrix. By detecting and quantifying the salt amorphization and formation of the amorphous free form in stressed prototype tablets we were able to assess their chemical liability risks. 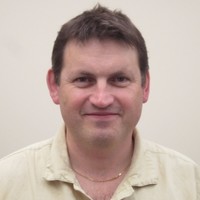 He earned his PhD at UIC by developing novel multidimensional solid state NMR experiments to study materials. During his postdoctoral training at Abbott Labs Aleš devised new strategies to obtain high resolution protein structures by solution NMR. Between 2001 and 2008 he built up global SSNMR capabilities at Pfizer and developed multitude of new SSNMR pharmaceutical applications. Currently at Vertex in Boston, Aleš’ interests expanded from SSNMR to all solid state characterization techniques. He is an author and coauthor of multiple scientific publications and patents.